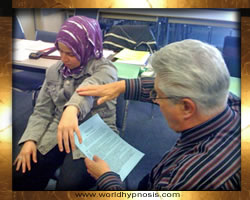 Induction is nothing but stimulation or generation of a particular thing or state. In case of hypnosis, inductions play a major role. To master the art of hypnosis it is very important to enter a state of trance. This is known as hypnosis induction. The statement hypnosis inductions mean that you are taken to a state where you can be hypnotized or such a state is generated in the mind. Hypnotism mp3 hypnosis has its source from neuro-hypnotism which clearly explains the state of hypnosis inductions. They are like zoning out or day dreaming. The only difference being that the latter occur accidentally while hypnosis is done on purpose.

In all the above activities, you try to connect your mind with the visualized activity or episode. Hypnosis inductions occur every time someone is taken to the state of trance or hypnosis. Hence it can be considered as the first step to hypnosis. Each therapist may have their own technique to induce hypnosis but the concept remains the same. The most commonly used technique I known as Braidism which derives its name from James Braid who first introduced hypnotism. In this technique an article is held about 10 -15 inches from the eye and the subject is expected to keep staring at it and concentrate. This helps the subject’s mind to keep visualizing the same object while it forgets about the surroundings and enters a state of hyper awareness. Staring at an object constantly leads the mind away from any distractions so that it can be hypnotized. With time, there have been many changes in this technique. Therapists have also used bright lights to gather the concentration of the subject and practice hypnosis inductions.

Once the mind is induced and taken to a state of tranquil or trance, it becomes easy to modify the thoughts. Then the mind can be manipulated to bring about positive changes in your life as it is open enough to understand and register new things. Once the subconscious mind is induced with positive thoughts, the conscious will also act similarly even when it is out of the hypnotic state.

This entry was posted in Hypnosis, Inductions. Bookmark the permalink.